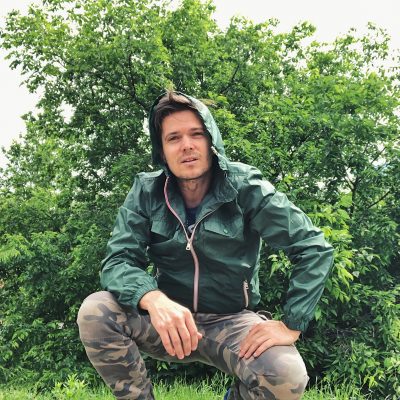 The article was published on November 26, 2020 in the GREEN BRANDS Hungary publication as a subscriber supplement to HVG

GREEN BRANDS Hungary widely announced that they are looking for the ‘Green’ Personality of the Year from celebrities who are all actively working for greener public thinking. Based on the public vote announced on the social media, the audience award was won by Csaba Gyetván youtuber, host of the Discovery Channel.

First he was skeptical that he has collected the most votes, although there were a good number of people who commented on the social network during the voting, “I voted for you, you deserve it!” and similar encouraging things. So, his first reaction was surprise, followed by a sense of joy, and then when he thought about it more, it became clear to him that winning such an award was also a responsibility.

And why the surprise? He accepted the nomination, of course, as GREEN BRANDS is a recognized, high-quality international organization, and it was an honor and an inspiration for him to “get in the ring” with the other nominees. Of course, he remembered that it would be good to win, but he judged the other candidates to have a better chance because their personal commitment to sustainable development or green attitudes would get more publicity and thus be more widely known..

However, he also considers the matter to be important, he says: . In addition to trying to live in an environmentally conscious way myself, as the host of the only domestic show on the Discovery Channel (Made in Gyetván Csabával), I am specifically looking for topics where the green idea appears. Only in the last year have I dealt with, for example, how to extract energy from landfilled waste, what happens in a solar park when the sun is not shining, how to utilize the energy of rivers or the heat of the Earth, what happens in an incinerator, or how to reuse it in a trendy way, sunglasses, plastic waste. “

So his legitimate joy and pride in the award, a sort of confirmation that he chose a good path when he set out for education in the form of entertainment, towards edutainment. He was not mistaken that his learning and work invested in programming would sooner or later pay off. Undoubtedly, there is now a “green wave” whose riding often brings “greenwashing” to life. But since, as he says, “There’s still plenty to sweep around your own house,” it would be an impact hunter to flood social media surfaces with “deep green” messages.

The award may also have rewarded voters for the fact that while sustainability is clearly emphasized in much of its video themes, it never appears intrusively, accountably. At the same time, in making this “fashionable,” they have a great responsibility to those who are able to address generations Y and Z in large numbers – and as he said, “Maybe I belong to that circle too.”

The award, as already mentioned, comes with responsibility. How would it take you if you were caught littering the streets, for example? But of course there is more to it than that. Because he considers it important to set a personal example, but it is more important to convey a message. The personal example is the short-range content that is broadcast on television and YouTube to many more people on the topics of sustainable development, waste recycling, and the green approach. He hopes to be able to get the work of more and more environmentally conscious companies to as many environmentally conscious viewers as possible.