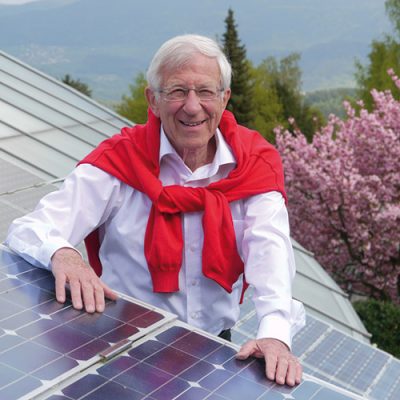 Information about the work of Dr. Franz Alt can be found at https://www.sonnenseite.com/

With his “Report” programmes from Baden-Baden he reached an audience of millions. And even after ten years of television retirement, he still has a strong media presence.
Whether it’s a face-to-face conversation with the German Chancellor or a discussion with readers of a local newspaper – Dr. Franz Alt is not a bit quiet even at 75 years of age.
The “representative of the sun on earth”, as someone once called him. For Franz Alt is all about the sun: as a fighter for renewable energies and a vocal advocate of the energy turnaround, the former television journalist tours the world. Alt gives 200 lectures a year, about four per week. He travels from Sydney via Tokyo to Sudan to explain his vision of a better energy balance.
World Wind Energy Conference in Cuba, Calw Community College, Mongolia. His message is clear: coal, oil and nuclear power are ruining our planet. Water, solar and bio energy are healthier, cheaper and technically feasible.
“The sun does not send us a bill”. Franz Alt coined this saying years ago. In the meantime it has become a global bestseller.
His book of the same name has been translated into twelve languages. Alt is delighted: the more countries adopt the saying with the sun and the bill, the better.

Franz Alt is a sought-after speaker who tells in a rousing and charismatic way why we should rely on sun, wind and water as energy suppliers all over the world. For this he was named “Speaker of the Year” in 2011. After 40 years as a television journalist, Alt knows how to make people aware of complex interrelationships and explain difficult issues in an understandable way.
The son of a master bricklayer, Franz Alt was born in 1938 in Untergrombach in Baden (now part of Bruchsal).
He almost became a priest if he hadn’t fallen in love with a girl as a Freiburg seminarian. Bigi Alt is still at his side today – as a wife and supporter in the fight for the energy turnaround.
Instead of theology, Alt studied politics, history and philosophy, wrote his doctoral thesis on Konrad Adenauer and volunteered at SWF. With only four years of journalistic experience, he became head of the “Report” editorial office in Baden-Baden in 1972. With a critical mind, the controversial journalist reports on grievances
in politics and society. From 1992 to 2003, he was head of the future editorial department at SWR and also presented the magazines “Querdenker” and “Grenzenlos” on 3sat.
In the 70s, up to 17 million people watched when Alt moderated “Report”. Critical journalism was his profession. And he is still critical today.

In 1986, after the reactor accident in Chernobyl, Franz Alt became part of the ecological movement. The energy turnaround becomes his life’s work. An affair of the heart. He is well aware that the transformation of energy systems costs money. But no energy system transformation costs the future, says Alt. The eco-missionary also wants to shake up politics. He is taking it to court, appealing to those in power to make “grand-suitable” decisions.
In the meantime, the question of costs is all too often in the foreground. Energy must be affordable. But Alt argues that the whole bill should be opened: oil and gas prices are rising.
Germany pays 86 billion euros per year to oil sheikhs and gas barons. And the environmental damage is five times as high as with renewable energies. China is now further ahead than us. Germany was gambling away the lead it had gained so far in technologies that rely on the sun, wind and biogas.
Alt also presents his ideas in his numerous books. His latest “On the sunny side: Why the energy revolution is making us winners”. Alt’s books have now been published with a circulation of more than two million copies.
150,000 subscribers receive his e-mail newsletter. On his homepage Sonnenseite.com Franz Alt gives an overview of the alternatives of energy production – renewable energies, solar building, solar economy – and informs about climate change, greenhouse effect and organic farming.
His wife Bigi keeps the website up-to-date on a daily basis. The Alt family also relies on natural energy in their private lives: for two decades the solar system on their own house roof has been producing solar power.
Alt is certain that renewable energies can become the means by which our planet can survive in the long term. Sun, wind, water power, geothermal energy and biomass are available for all time, in contrast to fossil fuels.
Behind the desire for the energy turnaround lies the hope for security of supply, nature-compatible energy supply, new jobs and local value creation. In short: the energy system transformation is a cultural and civilisation transformation, the beginning of a third industrial revolution.
And reality proves Franz Alt right: nowhere in the world was so much solar power generated in 2013 as in Germany.
In the field of renewable energies, 350,000 new jobs have been created over the past 15 years. And by 2020, one million cars on German roads should be running on solar and wind power.

Franz Alt shows realistic ways in which people can see climate change and scarcity of resources as an opportunity and master the transition from unrestraint to sustainability. Energy efficiency, ecological mobility, recycling and intelligent water and soil management play just as much a role as a return to natural energy sources.
Alt’s appeal is right at the top: after the nuclear catastrophe in Fukushima, Angela Merkel invited him to the Federal Chancellery for a four-eye discussion. Alt regularly talks to the Dalai Lama about energy issues, pilgrimage and religion. And Larry Hagmann, known as “J.R. Ewing” and in his private life anything but an oil baron, was also a close friend of the German eco-activist.
Numerous prizes, such as the German and European Solar Prize, the Human Rights Prize or the Environment Prize of German Business, testify to his great commitment as a fighter for renewable energies and against the greenhouse effect.
On the subject of retirement, he can only think of one thing: “I am a permanent employee with life and for life”.
The eco-visionary from Baden-Baden is still setting himself ambitious goals: 100 % renewable energies all over the world. But he knows that this is a tough battle. He knows that the energy turnaround is controversial, that there are opposing forces, setbacks.
That awakens the fighter in him all the more. He cannot imagine a retreat. Not even at 75. There’s too much at stake. As long as the energy turnaround is not won, Franz Alt will continue to fight.
The question of humanity’s survival is at stake, and every means is justified. For his untiring commitment to the energy revolution, Dr. Franz Alt will be named GREEN BRAND Germany Personality 2013.