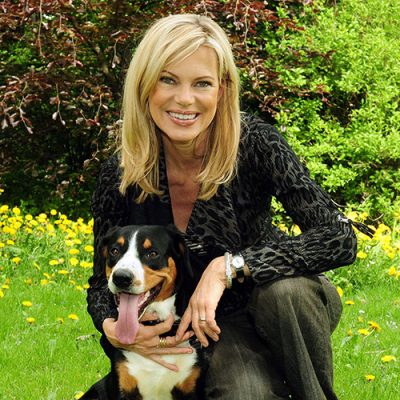 Moderator, Author, and UNICEF Ambassador and Ambassador of the UN Decade for Biodiversity

Information about the work of Nina Ruge can be found at https://nina-ruge.de/

“Everything will be all right”: This maxim runs through the life of Nina Ruge – not only on television. For more than ten years, this motto was her trademark, which she gave viewers at the end of every “Leute heute” show on ZDF.
Student councillor, presenter, author, UNICEF ambassador, winegrower – Nina Ruge has many facets and is much more than the well-known serious news front woman: a warm-hearted, curious, sense-seeking person who is always facing new challenges. She uses her popularity to give animals a voice and to bring people closer to a conscious way of life and the effects of positive thoughts.
Joy of life is her theme, optimism is in her blood. Her basic attitude towards life: Recognize what is essential. Be present in the present. Meet people without any judgement. In this way, deep connection becomes possible – with people, animals and nature.
Because nature and animal protection shaped their lives early on. At the age of 17, Nina Ruge decided to study biology and experienced “an intensive sensitisation and explosion of knowledge” at the Technical University of Braunschweig. From the bird identification course at 5 a.m. to plant identification books that she always carried with her to genetics, organic chemistry and environmental biology – the young Nina was interested in everything that flora and fauna had to offer. Her curiosity for the undiscovered runs like a red thread through her life. Born in Munich in 1956, she graduated from high school in Braunschweig in 1974 and studied biology and German literature at the university there.
As a child, Nina Ruge was shy and reserved, anxious to get good grades and receive recognition for it. But she carried within her the deep impulse to constantly develop herself and to look for new challenges.
At the age of 23 she started working as a teacher in Wolfsburg. Only slightly older than her students, she already knew how to inspire others, to pull along, to win them over. With her classes she explored intact and derailed ecosystems, analysed the development of cancer with them or explained the immune system on the basis of the destructive potential of HIV viruses.

Seven years later, Nina Ruge dropped out and left school at 30 to devote herself to her second love: television. At first she was drawn behind the camera. As script girl and assistant director she learned how to make films. “Chance and coincidence”, she says herself, brought her to RIAS-TV, the then “Radio in the American Sector”, which produced information programs for West Berlin and the GDR.
Her first film contribution there: An ode to Berlin’s first dog excrement sweeper. What sounds strange at first, she understood – then and later – to put into a socially relevant context. Nina Ruge reported on how fundamental mutual consideration is for the acceptance of four-legged friends in the city and what an important role the use of dog excrement bags plays in this.
But soon she moved on. In 1989, Nina Ruge began working as a news presenter for “heute journal” on ZDF. With this she became known to a German television audience at one go. She was now able to pursue environmental topics that had always been close to her heart on TV.
Among other things, Ruge hosted programs such as “Treffpunkt Natur” from the ZDF environmental editorial department or “TeleZoo”, where she reported on the entire spectrum of topics in German zoos for several years.
Their visible commitment to environmental protection and the common good grew. Nina Ruge moderated the presentation of the German Animal Welfare Award, the Day of the Insects or several events on the Federal Government’s National Biodiversity Strategy for the Federal Environment Ministry.
She became an ambassador for UNICEF, ambassador of the Jane-Goodall Institute Germany, godmother of the children’s hospice Bethel, is involved as patron of the “Network of and for women with disabilities in Bavaria” and as ambassador of the anti-discrimination office of the Federal Government for the interests of people with disabilities.
She also supports the NGO “African Parks”, the only non-governmental organisation of this kind in Africa, which takes over state nature conservation tasks on the black continent and has already managed 15 African national parks under its own administration. The NGO also focuses on the renaturation of the ecosystems, the re-establishment of animal populations and the training, education and employment of the local population.
Since 2012, Nina Ruge has also been active as an ambassador for the UN Decade of Biodiversity. In the decade to 2020, the United Nations wants to raise awareness of the importance of biodiversity for our lives and encourage sustainable consumption. Nina Ruge exemplifies this and shows in an exemplary manner how each individual can contribute to preserving nature in its diversity through his or her purchasing behavior. In addition to her matter-of-fact and sober news business and her commitment to the environment, Nina Ruge developed another passion: writing. The energetic author has written more than 20 books to date. Her spectrum ranges from non-fiction to fantasy novels and children’s books. With her warm, winning voice, she also regularly reads audio books.
But her passion is for guidebooks. She fights against self-optimization addiction and egomania and pleads for a healthy self-love and attentiveness with fellow men, animals and nature.
Nina Ruge has also written an “Everything Will Be Fine” trilogy. In it she has collected the most beautiful quotations of great poets, thinkers and sages – for thinking, dreaming, loving and laughing. For her, the most beautiful things in life are not things, “but an attitude – and that leads to successful relationships, warmth, love and security”.

Nina Ruge has found her personal relaxation room in the mountains of Tuscany. Together with her husband, top manager Wolfgang Reitzle, she lives and works on her own vineyard in Tuscany. In the mountains of Lucca she cultivates wine and oil.
There she sits by the lake, meditates, keeps geese, peacocks and chickens, walks through the olive groves with her two Swiss Mountain Dogs, works on her books or lectures. Nina Ruge has been a vegetarian for 15 years. In Italy she is (almost) self-sufficient: home-grown vegetables from the garden and eggs from her own chickens are on her menu.
The honest appreciation for the little things, for people, animals and the environment is a constant in the life of the millenarian. Numerous rescued cats live with her on the estate. Nina Ruge collects toads from the road and earthworms from the pavement. She supports the Munich Animal Rescue Service and, inspired by the Insect Day she hosted in Berlin, she plans to focus on insect protection and biodiversity in viticulture in the near future.
She makes no secret of her age. Even at the age of 60, Nina Ruge is still a beautiful, strong and impressive woman. “We are”, she says about herself and her peers, “a fearless generation facing ageing”.
The image of old age has changed, also through role models like her. Politics, economics, technology – these are her themes to this day. She has depth, even though Nina Ruge hosted the tabloid magazine “Leute heute” for ten years, and for some she stood for lightness and superficiality.
Dealing with weighty topics with ease – Nina Ruge uses this gift to commit herself: “For the preservation of the wonderful, dreamlike, infinitely valuable biological diversity on our planet”. Her trademark: a radiant smile and a big heart. She lives sustainably, gets involved, draws attention to grievances, encourages reflection and action.
For her commitment to the environment, nature and species protection, Nina Ruge will be awarded the GREEN BRAND Germany Personality 2019.